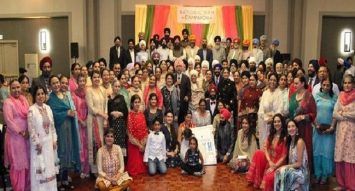 The US based National Sikh Campaign is going to make an hour long documentary on the founder of Sikhism Sri Guru Nanak Dev Ji. A fundraising event in this concern was organized by the NSC in Los Angeles in which more than 300 members of the Sikh community gathered at the Cerritos Sheraton to raise funds to support this documentary. A press release shared by the NSC with Sikh24 informs that the National Sikh Campaign (NSC) is working with Auteur Productions to produce an hour-long film focused on Guru Nanak Dev Ji’s life and his message so that it could be released next year during 550th birthday celebrations. Dr. Surinder Kaur Dargan, one of the main organizers of this event, said that there is still a much need to acquaint the world about our faith and the founder of our faith. She added that it is a time to fulfill this need as the whole Sikh community will be celebrating the 550th birthday of Sri Guru Nanak Dev Ji next year. “With this documentary, we are laying a foundation for our future generations,” said Deepinder Singh, who was the co-organizer of this event.